One Night in Heaven

I crashed back down to earth from my holidaying last night courtesy of an 8 hour night shift in a glossy mall of doom.

Never having done a night shift before, I had no idea how to prepare for being awake and not drunk past 3am. Call me what you like, but I spent most of yesterday trying to work out what the results were going to be when someone asked me to fold a knitted sweater better whilst I was off my tits on red bull and trying to stop poking myself in the eyes with a coat hanger to keep them open. My preparation involved baking for the major part of the evening. The results of which are below: 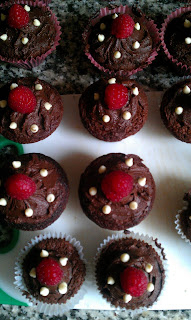 Having managed to get 22 cakes out of the mixture that was only meant to make 12, I contemplated eating the spare 10 and just never telling anyone and then thought it was safest to take myself off to bed before I didn't argue with myself and Dawn Frenchdom edged ever closer to my already less than svelte physique.

I'm a bad sleeper at the best of times, I punch (ask my friend Marie) I kick (ask my sister) I talk (ask my friend Jamie) and I'm quite capable of waking up very distressed about whatever I dreamt about and then holding a grudge against whoever was involved in the dream (ask several ex boyfriends). So, trying to sleep in the middle of the day when I'm hopped up on sugar and raspberries and dreading my impending incarceration was not easy.

I decided to catch up on my guilty trash TV pleasure: Made In Chelsea. Now, I know it's not good TV, and no, I can't enlighten you at all as to what the hell mongrel genre the programme even is. But, for some reason I like to watch it. Enjoy it/give a crap about it is stretching it, but I do quite like to have it on. While I was lying there I kind of wished I had a boyfriend. Now, this is the first time I've felt like this for a couple of years so it was quite exciting to admit. Obviously, I was watching Made in Chelsea in the middle of a Sunday afternoon so I was probably going to need a closet gay boyfriend, but then that's the beauty of MIC - it shows you that even super rich women with the world at their feet will also go for the same option.

I dragged myself out of my pit of Sloaney indulgence and headed in to work. In fairness, it wasn't quite as bad as I thought it was going to be. There were definitely some negatives:

Now, I don't mean to be scathing and derogatory. Actually, yes I do, but in a more informed way than you might think... you see, everyone has their mental blocks. Some people are racist, some people are homophobic, some people are sexist and some people are just morons to everyone. I have a complete lack of understanding as to how to make working on a shop floor a fulfilling job. People who profess to have "always wanted to work in Topshop" leave me doing my best impression of anyone on TV who's just foud out they've been cheated on... I just stand muttering "Why" over and over again with my eyes watering and my feet shuffling backwards. The years I spent in retail were some of the dullest of my life, of all the areas I've worked in (building, plumbing, waitressing, office, acting, elfing) I can honestly say retail was the worst.

Last night I was asked to sort out all the knitwear. After someone had shown me what constituted knitwear (I was caught suggesting a jersey was knitwear) I was told to collect all the knitwear together and sort it out. I was allowed to sort it out into whatever I thought was appropriate. After my initial suggestion that we grade it all from "Kill it with fire" to "Which limb is this for?" to "I pity the sheep this came from" was greeted with a stony glare and a mildly alarming grip on a coat hanger, I got on with sorting it into these categories:

This seemed to go down better and the hours passed like a kidney stone through a eunuch.

Today my body is extremely confused as to the time and the feeling of degradation that surrounds us. I've showered a few times but I still can't get rid of this burning desire to own something in dalmation print. I fear I have been through something akin to Hugh Jackman's experience prior to having adamantium bones... only I'm destined to fight crime dressed as RumpleDeVille. Oh joy.