The boy and the girl put the key in the lock and crossed the threshold together. 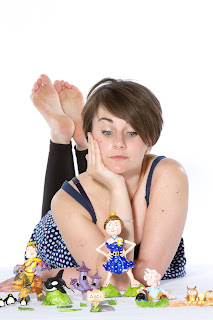 The boy put his boxes on the bed, the girl grinned and put hers down on the other side of the bed they were going to share.

The boy and the girl opened the cardboard flaps on the top of their boxes and began to pull out the possessions that they would fill their home with.

The boy had mainly wires. The girl looked at them and wondered what they were for.

The girl had mainly potions. The boy looked at them and wondered what they were for.


Until I lived with a man I had no idea a person could use and enjoy so many wires. Wires appeared all over my life all of a sudden... thin ones and thick ones, ones with square ends, one with pluggy ends, ones with ends that were the same at both sides, ones with ends that looked torturous, ones that were split in the middle and needed holding to work properly, ones that were thicker than my arm, ones that lived in nests with other wires and never came out of cupboards, ones that resembled Clapham Junction for their stunning complexity, ones that tripped me up at night, ones I would unplug and get frowned at for, ones that didn't work when I used them but behaved perfectly when he entered the room... slutty little wires.

Life BM (Before Man) consisted of only one wire for wires' sake: my phone charger. Other things I owned had wires but they were wires that mainly went from something I used and into the wall. I had never had cause to connect my hair dryer to the printer or hook my bedside lamp in to the wifi.

I was not a particularly technical person I suppose. Below average interest in technical shit? Yeah, probably. But I'd never noticed. I just thought I was a me.

I began to notice that his underarm deodorant spray was annoying me. It was always hanging out somewhere it shouldn't be. Irritating can of annoyance that moved from surface to surface wherever he had most recently used it. Why didn't it live anywhere? I keep all my stuff on my dressing table why doesn't he keep his on his... oh, he doesn't have a dressing table. I guess his bedside table is his surface, why doesn't he keep it there? It's covered in letters he doesn't open, some wires, some Magic The Gathering (wtAf?) cards and a few cups with some mangy coffee in the bottom.

Then it dawned on me. The deodorant gets everywhere because it doesn't live anywhere BECAUSE IT IS HIS ONLY POTION. There is no cluster of half used upright bottles and liquids and failed attempts to be a leggy blonde that belongs to him.

I looked at my own dressing table; mousse for my limp hair, hairspray for my straight hair, moisturiser for my dry skin (separate bottles for face, legs, bum and hands), toner for my sagging skin, cleanser for my spotty skin, foundation to cover up my skin, eyeliner, eye pencil to draw on my skin, blusher and eye shadow to colour in my skin, mascara for my stumpy eyelashes, lip gloss to ward off vampires (I think) and Bio oil to get rid of my scars. Oh, and my own deodorant that's been specifically designed not to show up on my clothes instead of stopping me sweating. Helpful.

Does he look at my potions and think of them as I think of his wires? Is he baffled? Does he wonder what will happen if I don't use my potions? Sometime I do.

One day he comes home with a new game and it cost £50. £50! That's quite a lot of money for me. I sit and watch him playing it... it's going to take months to complete and he is totally happy and absorbed. There's a wire on his head to talk to other people playing, there's a wire charging the controller and he is totally content.

I am jealous. I wish I knew how to lose myself in games and get so lost in the fantasy. I wish I had £50 to spend on a game. I get up and go to the bathroom and apply Bio Oil to the scar on my arm. the Bio Oil was £40. If I didn't want to get rid of the scar then I could play a game. Did I want to get rid of the scar? I don't know. I just know I burnt myself pretty badly and then people said it would go away if I used Bio Oil and so I bought some and got rid of it.

Suddenly I was a bit scared and insecure... I had lots of potions and the man had lots of wires and we suddenly seemed very stereotypical and I didn't even know if I wanted the potions or when I'd decided to get them but now they were there and I had left it too late to understand wires and games.

Am I a proper 'me' or a generic 'girl' or a bit of both? I suspect I am a bit of both but now I am less confident in myself of what I've chosen and what's just happened because I didn't question it.

Some days later a girl came round. She's a friend of mine and we were chatting about a big day I had coming up where I'd already told her I was considering getting "full wax downstairs as a surprise for the man". (It's best if you read the bit in the speech marks in a weird whisper RP accent as though you have a large ball in your mouth that you're trying to talk round because you're not supposed to just say things like that out loud in case Voldemort hears). (Fuck. I mean He-Who-Shall-Not-Be-Named).

She told me about times she'd tried it. I never had.

Then we discussed armpit hair and we agreed that if we could never have armpit hair again then we would gladly accept the offer. There's never going to be a time that we want it! We declared. Then the  girl who is my friend said, "Because, even having a full "downstairs" might come back into fashion one day so even that I wouldn't want gone forever."

And I was delighted.

It was a tiny relief. A tiny chink of light that some of my decisions might be my own. Is it not fashionable to have pubes? Well, oopsy daisy fashion, BECAUSE I'VE GOT BLOODY LOADS OF THEM!

They are all over my downstairs and sometimes they land on the toilet seat and look suspicious. They poke out of my pants and my swimming suit and they are bouncy and fluffy. And I cannot be bothered to do anything about them!

I don't mind them being there and I really don't want to faff about getting rid of them. I have a masters degree... if you think I worked for four years to get that so I could sit about with a bottle of Veet and some tweezers causing myself pants rash and itching then you are a dumb motherfucker.


I didn't tell my friend at the time in case she didn't want to be my friend any more because I had a crazy Wild Thornberry vagina cosy. But inside I was delighted.

I have my own wires.
No comments:

Musings on Jokes and Offensiveness

I've been musing on some new material and basically sketching out the possibility for a new bit that I hadn't fully thought through.

I sort of wrote it, looked at it, wondered about it, and then abandoned it quite hastily but the thought process I've been through made me stop and think so I'm sticking it out there as an interest piece.

If the original concept for the joke offends, please accept my apologies and continue to read as that's the whole point really.

The basic concept for the bit was:

On Friday my car broke down, and when I pulled on to the hard shoulder I lucked out massively and ended up next to a man with an empty transporter lorry who was going my way and offered me and my car a lift.

Now, I accepted the lift totally aware that it could be one of two things about to happen:

1. The start of an excellent true story Rom Com about how I meet the unlikely love of my life (sorry Alan) and we are eventually played by an aged Paul Rudd and whichever 21 year old is currently Hollywood old enough to be dating 55 year old men on screen.

2. I get raped and murdered and dumped in a hedge just off the A1(M) where it's quiet.

Neither happened so I guess I just must not be as pretty as I thought.

Immediately I wasn't really happy with the end of it... something feels gross about that idea. I don't like mentioning rape during something that's supposed to be comedy - it's not funny. So, I thought I'd take the rape part out as it seemed gratuitous and unnecessary and making light of something I don't want to poke fun at.

Obviously, without the rape the joke doesn't work any more really because there's not an obvious connection that a murder would be "beauty" related. I totally know and understand as well that this is the case with real world rape (as opposed to joke world rape)  - I'm not making that connection on any level, I'm just talking in terms of a superfluous cognitive connection strong enough for a joke to work.

So I thought, no, I'm going to abandon this joke I think. It's unpleasant, I don't know how to make it funny and something I'm comfortable with so I think I'll just leave it.

Then, I wondered why I wasn't so worried about the murder part of the joke.

My general rule of thumb for deciding how I feel about telling a joke is "Who is the victim of the joke?"

If I would be ok telling that joke in front of someone who could see themselves as the actual victim in the joke, then I am ok telling it. If I'm not, then I shouldn't be telling it because I'm obviously worried it's offensive.

In the joke above, I think I am the victim. I am eventually joking about my own big headedness, vanity and appearance.

But I'm still not OK with it.

So, by mentioning it in the way that the joke is, I think I am also making real world murder and rape victims a victim of the joke by connecting their experiences to beauty?

Is it implying blame on the real world victim by assuming in the joke world that there is a cause that they may have carried with them?

Or, is there nothing extra offensive in the joke other than the fact that it uses something horrific to get a cheap laugh?

Which brings me back to the question of why it was definitely the rape, not the murder, that made me flag it up and abandon it.

Has rape, rightly, been too flagged up recently as an area for strong concern and attention to make sure we're dealing with it properly? I know in the comedy world "rape gag" comedian is synonymous with "hack" so maybe I'm ultra cautious because of that.

Is murder still cartoony and generic enough to be gotten away with? Is the word "murder" overused enough to be the linguistic equivalent of a mouse bashing a cat with a mallet? If I specified a type of brutal murder would that make it not acceptable?

I don't know yet. Sorry there's no conclusion! Just musing on jokes and acceptability and stuff.
No comments: