So... today I've been working very hard on my baking skills... I've got bread proving in the airing cupboard (you're meant to do that I'm not being willfully zany) and I've got the first batch of Rolo cupcakes in the oven now baking. The second batch won't fit just yet so they are still sitting on the side in a cloud of cocoa powder and sugar.

I can assure you that absolutely in the kitchen in incredibly sticky - including my face and people who happened to walk in during the cake making process.

I had a request earlier to post the recipe for my cupcakes in my blog, so I thought I would... here goes...

100g Plain Flour
2.5 tbsps of Cocoa Powder (I spilled a bit extra in and it doesn't seem to have mattered)
140g Caster Sugar
DVD box set of Blue Planet to watch while eating
1.5 tsps Baking Powder (I'm not sure why we can't just use SR Flour but hey ho)
A pinch of salt (It is not a necessary requirement to pinch the salt out of the tub so don't freak out if you have a pouring vessel.)
40g Butter (If you keep it in the cupboard rather than the fridge it works better.)
120 ml Milk
Unending patience.
1 egg (not the shell)
1/4 tsp Vanilla Essence (Personally I find the idea of trying to measure 1/4 tsp of vanilla utterly ridiculous so just a splash is fine in my recipe.)
Tim Minchin's music for the background.


Somewhere between 30mins and 2 hours preparation depending on attention span and whether you need to go to Tesco mid baking because you don't actually have all the ingredients.
Baking: Supposedly 25-30 mins but that entirely depends on setting the oven properly. Who knew.

2. Find a bowl with high enough sides that you won't spray mixture everywhere when you put the electric mixer in it.

4. Try not to let the butter see the recipe or it might get a little nervous about what's in store: http://www.youtube.com/lauralexxcomedy#p/u/6/SAmbBOHgbDM

5. Mix all that stuff together until it doesn't seem like it's going to mix much better. It's meant to look like sand so try for that and if it doesn't seem to be happening after 10 minutes then just move on and hope it sorts itself out at a later stage.

6. Remove the nearby tea towel from the electric mixer: 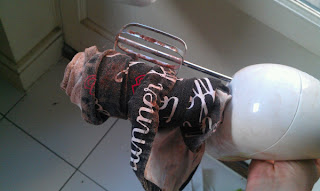 7. Get another bowl (less fussy on the particulars of this one) and put the milk, egg and vanilla splash into it. Give it a good whisk up. I find it lots of fun to pretend to be Victorian and use a hand whisk. This might also have been entirely necessary because my house mate confiscated the electric whisk after step 6.

8. Add half the whisky wet stuff to the sandy stuff and mix it all up until it's smooth or until you get really bored of having loud whisky stuff going on.

9. When that's all smooth you can start adding the rest of the wet stuff and mixing it inbetween adding little splashes. Get it as smooth as you can.

10. Eat a few spoonfulls because we all know the mix is much better than the cakes anyway so why wait?

11. Put the cupcake cases into the little tin thing for making cupcakes.

12. Put one spoon of mix in the bottom of each one.

14. Cover up the Rolo with more mixture until it looks like a good amount of mixture. You're meant to be able to make about 12 cakes out of this much stuff so try that but don't worry if it's not right. A good idea is to make 15 smaller ones and then you can eat 3 before anyone sees and no one will know any different.

15. Bake them until they're cooked. You can do that "poking them with something sharp and see if it comes out clean" thing but be careful not to hit the Rolo or you won't be able to tell.

17. Put whatever icing you want on (I'm not doing all the work for you - the easiest thing to do is to just smash a few more Rolos on the top).

And there you go! I'll be tweeting photos of the finished items later ( @lauralexx ) because they're still in the oven while I'm writing this.