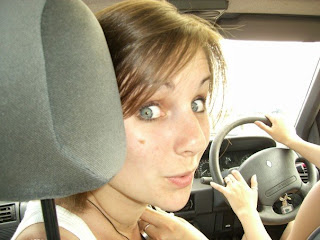 In a sense the trip starts here I suppose - having just left Canterbury and propelled myself not quite to the lap of the land but to the lap of my family in deepest, darkest Somerset. Was a hefty wrench and a small (ish) screwdriver to leave Canterbury but has been done and done well.

We decided on the trip home to pop in to old Heston Blumehenatinalefbgesjal's 'Little Chef' in Popham on the way home for some spangly greased up food. I have no idea what the food was like because I was so frightened by the toilets I had to leave; it's the weirdest thing! I had no sooner released my nether regions and was posed ready to apply them to the seat when it blasted a rousing chorus of 'Bangers and Mash' at me! What?! Who needs to be sung to about food when you're clearly dealing with the other end of the proverbial spectrum at that point? I will also never listen to James and the Giant Peach in the same light having been read choice phrases whilst *euphemism for weeing*.

So then the rest of the drive home happened - turns out they don't even light stonehenge up at night - WHAT IS THE ATTRACTION TO THE ROCK HEAP?

And that was day one! Let's hope things get slightly more entertaining than this as the Winter Adventure begins...

Song of the Day: A rewrite of the Rolling Stone's Classic, with a West-Country twist... "Hey, You, Get off of my Land"