The First of Happy

Well, no, I don't have an Advent calendar still. I nearly bought one at a service station on the A1 at 1am this morning but I didn't want to look at it every day in the build up to Christmas and smell Ginsters and misery.

It pretty much has to go straight into Christmas on the 1st December because something has to happen to pick me up after the crushing loss of all those beautiful moustaches. I love a good moustache. Obviously it was a really unsettling day when mine went from being a faint insecurity to a visible intrusion but that's nothing a good dose of bleach, a bottle of wine and an evening of me time can't fix.

There has actually been a slight upset to my 1st December joy. This morning I found out I am being cheated on. It's quite the mood killer when you're trying to get into the Christmas spirit.

I know what you're thinking, "Laura, you're not even in a relationship - I think your hallucinations are getting out of control. Get some rest and come back when you're lucid." But that's where you'd be wrong.

Since October 2010 I've been living with someone and I thought we were really happy together and I thought it was going beautifully. This morning, in a completely unprovoked bubble puncture, I found evidence of playing away on the coffee table. ON THE FREAKING COFFEE TABLE? ARE YOU KIDDING ME?

Why rub it in my face? Fine. You're not totally satisfied with me. Tell me. I can change it up a bit or maybe we need to talk about some different "recipes" but does it really need to be this cruel when it happens? I don't really understand how the people who are supposed to love you the most can be the ones who always end up fucking you over. On my own bastard coffee table.

I literally feel sick. I haven't even been able to put it in the bin. I'm not sure if it's meant to provocation, whether I'm supposed to be the one to mention it...?

This is what I woke up to this morning: 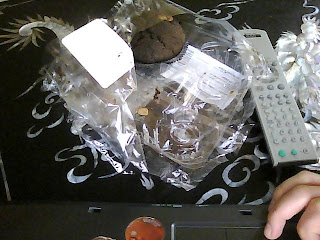 A fucking muffin. A shitty, shop bought, chocolate chip muffin. In plastic packaging. Not even covered up over night. WOULD IT HAVE BEEN SO HARD TO PUT IT IN THE BREADBIN SO I DIDN'T HAVE TO SEE IT?

If my baking is not enough for you, dearest housemates, then tell me! I can make more! I can branch out with the recipes, I can cook requests, I can take more lessons. WHAT MORE DO YOU WANT FROM ME?

I'm so hurt. I can't believe they had to go for such cheap sugary delights when I have been bending over backwards to bring tiny sweet delights into this house. This must be exactly how Colleen Rooney felt. I don't know if I'm even going to be able to look people in the eye this evening. The worst feeling is the feeling of inadequacy... what was so wrong with my cakes that it had to come to this? Have I been neglecting? Were they not interesting enough? Was I not experimental enough?

I just don't know. Thank heavens for impending Christmas glory. Between this muffin based infidelity and the lack of tache in my surrounding area I just don't think I could go on without it.