The Circuit - An Introduction


The points have been tallied, the stars packed back into boxes, and the posters burned into retinas; the Edinburgh Festival is well and truly over for another year. The comedians have fled back down south to attend meetings, lick some wounds and repair their livers for next year.

After the festival, comedians migrate to Africa for half the year in order to keep warm, reproduce and get some writing done. Well, actually, we don’t… we go back to work.

Work for a jobbing comedian is called “The Circuit”. We call it that to convince ourselves we are involved in something resembling exercise… for it’s not a circuit; it’s not a smooth loop of linked up gigs and convenient hotels. A week of “The Circuit” for most comedians would look like a child has eaten a pack of Smarties and then scribbled randomly on a map.

I live in Brighton… my travelling for the next fortnight looks like this: 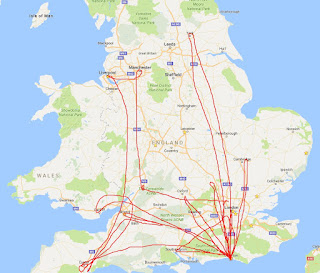 Edinburgh and the circuit can sometimes be interpreted as being at odds with each other… “club comedy” might be used as criticism by an arts festival reviewer, or an Edinburgh hour might be looked down on for being made up of routines used by that comedian at rowdy clubs outside of the festival.

I loathe that view. I take it to mean the reviewer/critic/loudmouth has little to no experience or understanding of what it takes to be a live comedian the year round.

For me, it’s unbeatable in satisfaction, variety and responsibility.

It’s being invited into little pockets of communities, for just an evening, and being part of them before vanishing back into the night. You are invited into birthday parties, hen parties, stag dos, work drinks and friends reuniting, and you are entrusted with the success of their excursion.

You see arts centres, community halls, pubs, back rooms, theatres of all different sizes… you meet volunteers, dedicated fans, disinterested collateral bystanders, and then you see motorway and home.

I love the variety. My diary will say “Bicester, £150, MC for Kevin Comedypromoter” and I’ll know nothing more than that until I get there. Sometimes that description means a 250 seater theatre with impeccable technical spec and a full house booked in. Sometimes that exact same descriptions mean 12 people watching football with the sound down in their local pub until an odd woman with a microphone in the corner has finished telling no one about her marriage.

With an Edinburgh show, your audience comes to you. They buy a ticket, sit down and allow you a little trust that you are what they want. It’s invigorating, testing and creatively expansive.

On the circuit you go to an audience… and they are anybody and everybody. They are someone on the one night they managed to get a babysitter and get out of the house with their partner, they are someone a bit tired from work and not sure why they committed to tickets 4 weeks ago, they are someone so up for it they are ready to laugh at the offstage announcer, they are someone at their first gig and thinking heckling is 90% of the show… and you are the catalyst for their homogeny.

It is the most exhilarating thing to walk on to that stage and into the light, into their night, and be sure that what you have in your mind and mouth will be enough to construct their evening.

99% of them won’t remember your name beyond the compere’s introduction, but they will remember how you made them feel. By the time you are in the car, eating junk food in the dark and wishing the sat nav was promising something earlier, they can’t remember a single joke; just a vague outline of your subject and a physical memory of their body laughing.

The next day they could decide they hadn’t liked you at all, or that they loved you so much they’re retelling your jokes badly to family and friends… but you are so unlikely to ever find out. You are already on the road somewhere else to do it again for another community. You’re planning the nuance alterations required to make tonight’s Cornish Arts Centre audience react just as much as the Birmingham football crowd did last night.

The Circuit is where we learn how to be comedians and there’s space on it for such infinite variety. It would be overwhelming if it wasn’t so beautiful. If you’ve ever laughed at a festival show, or a television programme, then you’re laughing at a product of the circuit. Dig out your local comedy club, try a few to find one you like; do it, and I guarantee you’ll find something you like on it somewhere.